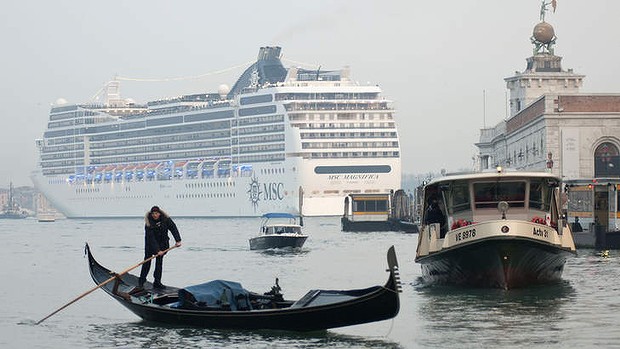 A year on from the Costa Concordia cruise ship disaster, the luxury liners that ply the waters just in front of St Mark’s Square in Venice are stirring unease in the world-famous lagoon.

The debate pits conservationists who are up in arms about the environmental damage caused by the giant ships against supporters who say they bring the city much-needed revenue from passengers.

“It’s impossible that there could be another Concordia in Venice,” Massimo Bernardo, head of the Venice Cruise Committee, said in an interview.

“An order from Venice coast guards states that two pilots and two tug boats have to be deployed during the manoeuvre as well as the captain,” he said.

“In order for there to be an accident, everyone would have to go mad all of a sudden!”

The ships regularly steer in close to the city’s most famous monuments in a “salute” manoeuvre similar to the one performed by the infamous captain Francesco Schettino on the Costa Concordia.

For all the assurances, the sight of cruise ships as tall as apartment blocks just a few metres from St Mark’s Basilica is an arresting one.

“They really are too big to pass here but they bring a lot of tourists to Venice,” he said.

Official figures from the European Cruise Council show that the cruise industry brought some 536 million euros ($A629 million) in revenue to Venice last year and employs 5,470 people in the city.

The ECC also said that cruisegoers represent some 20 percent of the tourist traffic in the city, which has just 58,000 inhabitants but more than 20 million tourists visiting every year.

“It’s clear that these resources are ever more necessary at a difficult time on the employment market,” said Roberto Perocchio, director of the Cruise Ship Passenger Terminal at the port.

“It’s very important to keep the economic and social fabric of the city alive,” he said.

One widespread fear among Venetians is that their city is well on the way to becoming a museum as residents are forced to leave to find jobs.

The arguments from cruise ship supporters fails to convince Cristiano Gasparetto, a local architect and campaigner for conservation group Italia Nostra who has taken a leading role against the cruises.

He said the ships are “monsters” that disfigure his beloved city and they add an extra burden to the local budget because of the damage they cause.

“A ship of this size displaces a huge amount of water under the surface even when it is going slowly. That means that the quays along the lagoon constantly have to be renovated,” Gasparetto said.

Gasparetto said the cruises also damage the foundations of ancient buildings and contribute to atmospheric pollution since even when they are docked they can produce the equivalent of emissions from 15,500 cars every day.

“Cruise ships are unaesthetic, polluting and destroy the ecosystem of the lagoon,” he said, adding that within a few years the waters of Venice will be unable to clean themselves as they do now.

Given Venice’s global status as an architectural treasure, the debate has foreigners riled up too.

World cultural figures including Turkish writer Orhan Pamuk and US writer Bill Viola signed a petition to the Italian government in October asking for restrictions to be enforced.

The signatories said they were “surprised and shocked” that a restriction imposed in March which banned ships of over 40,000 tons from entering the area around St Mark’s Square had been suspended.

The ban on cruise ships sailing too close to the coast in Venice and in nature reserves was imposed after the shipwreck of the Costa Concordia.

The letter slammed “the increasing, invasive and uncontrolled presence of enormous cruise liners.”