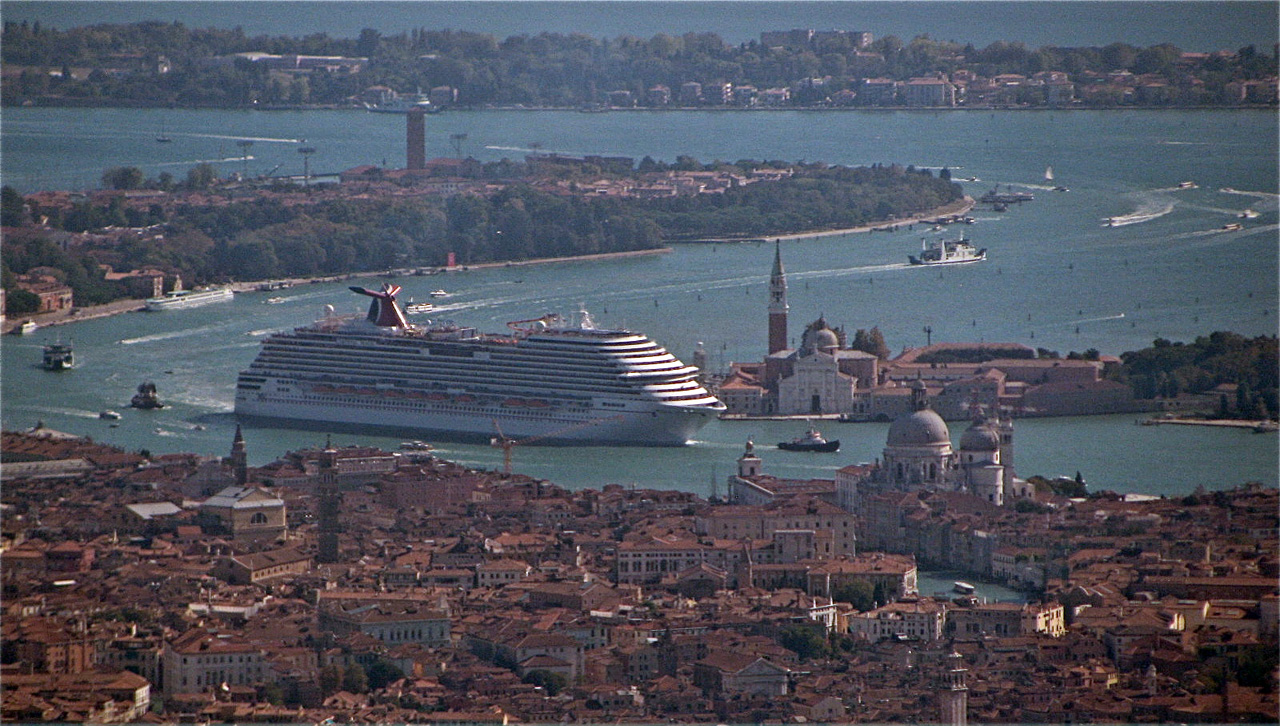 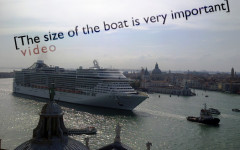 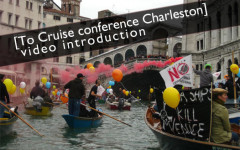 After learning of the Congress on Cruise Tourism in Historic Ports programmed in Charleston we felt that if there is one city in the world which must absolutely be discussed then it is Venice.  Amongst the city ports coming to grips with cruise tourism, Venice is, in fact, the oldest, the most precious and certainly the most fragile, and what is happening here is emblematic of the problems these enormous ships provoke with greater or lesser intensity wherever they dock.  We are not able to participate physically in the Congress but we should like to make our contribution with a short film introduced with this presentation.

In Venice the mobilisation against huge cruise ships started in 2006 when the increasing number of transits across St. Mark’s Bay began to cause serious worry to the population.  So as to understand why we protest it is necessary to know that the so-called “curtsey”,  similar to that executed at the Isola del Giglio,  between the Ducal Palace and St. George’s are almost 2,000 a year.  But the problem cannot be resolved at the price of devastating the lagoon definitively reducing it to a mere sea-inlet  in a century of adaptations to port facilities clearly incompatible with the city.  And yet, this is the solution the Italian authorities are following.
Venice has always been a port, and has based its thousand-year-old history on port facilities and commerce, but the gigantism which characterises modern cruise ships is evidently in contrast with the scale of the city and this alone should be enough to decree the ban on these  ships. When the citizens began to reflect on this phenomenon they became aware of the very many problems which are totally ignored by the authorities: you will see them listed in the film.  However, we should like to pause for a moment on one of these because it was completely unsuspected : Venice is dying from tourism! Thirty million visitors a year are turning it into a theme park, disrupting the economic and social tissue and obliging housing into non-residential functions : innumerable hotels, guest houses, bed and breakfast pensions and boarding houses; but the inhabitants have been reduced to less than 59,000 whilst the historic centre is visited every day by at least 70,000 tourists.  The cruises with their two million passengers a year make their  notable contribution to the situation, and this is one of the poisonous fruits of cruise ships in Venice.
It is certainly scandalous that the huge ships continue to cross St. Mark’s Bay, but to face up to and resolve this problem by moving the ships to a different docking area through an alternative route is only hiding the dust under the carpet – all the other risks connected to cruise traffic remain unaltered and, in the case of the lagoon, are aggravated by the excavation of further port canals in an obsessive reiteration of past errors.
The economic gains for the city deriving from cruises have not been demonstrated; the only statistics  available have been supplied by the Port Authorities and it is understandable to think that they are of an interested nature.  But, admitting that these gains exist, they must, however, be measured against the environmental and social costs of the cruises, and this has not been done. Public health and an undamaged environment are priceless.
With these premises, it is easy to understand why our Committee ‘NO GRANDI NAVI- LAGUNA BENE COMUNE ’ was instituted on 6th. January 2011 to co-ordinate and give a single voice to the multiplicity of associations and citizens who had been mobilising for years against the huge cruise ships.  Thanks to our work, the problem of these massive ships has finally entered the political debate with full rights, not only on a civic level.  But satisfactory solutions are still not to be seen.  And yet they exist.  Congresses such as the one in Charleston are great occasions to raise the awareness in the world of the logic of social and environmental exploitation expertly hidden behind the glossy offers of the cruise ship companies, exerting pressure on Governments to take the necessary measures.