Cruise ships are floating major works. Unsustainable. Polluting. Devastating for our territory. In Venice we are building a three-days mobilization along with all the committees, national and international, who struggle against great works and devastating environmental impact.

June 7-8-9  –  Big international and national mobilization
Cruise ships are floating major works. Unsustainable. Polluting. Devastating for our territory. In Venice we are building a three-days mobilization along with all the committees, national and international, who struggle against great works and devastating environmental impact. Three days to get to know each other’s, to create a network. I think it will be a great opportunity to assort different realities that move in the same direction: the rejection of unsustainable patterns of development for territory and citizens.
These sea giants can have a 330 meters overall length and can be 65-70 meters high. In Venice the highest buildings touch nearly 20 meters. When they cross our canals, walls and windows shake. They are always bigger and increasingly numerous. It is for these reasons that we built, over a year ago, the Committee Against Big Ships.
Our key words are sustainable development, territorial defense, democracy.
It is for that we are organizing, for the days 7-8-9 of June, a big international and national mobilization. Our wish is to have in Venice thousands of people who, daily, fight against major works. Three days of meetings and fights in which we want to be protagonists again, and we want to reaffirm our right to live in a city where democracy and common goods such as health and culture, are set first before the wallets of the powerful speculators looking for profit at any cost.
We are not against tourism. However, we are against an unsustainable touristic standard: the one that “docks” in our city on board of big cruise ships. Because they are not secure, they pollute and affect the fragile balance of Venice’s lagoon.
Episodes as the tragedy of Genoa (happened few days ago) and of the Giglio’s Island should remind us of it. These tragedies show how frequently and suddenly accidents can happen, even if pilots are experts and weather is calm.
Emissions of a big ship can be compared to those from 14.000 cars; a savage pollution that increases during summer, when we can have more than seven of these “floating condominiums” per day, with their engines always turned on, even when mooring next to the popular and populous S. Marta neighborhood. To that, we should add the rain of electromagnetic waves that every minute go through our homes and our bodies because of the tens of on board radars that are always running.
At the passage of these floating Major Works, beneath the surface, tens of thousands of water cubic meters are moved, which are then pushed against the banks and palaces, with a force previously unknown .
For these reasons we ask for the sovereignty on the waters of Bacino S.Marco to be removed from the Port Authority and from its president Paolo Costa – a man who has always sponsored major works in Veneto, involved with the defense of multinational ship-owners interests. We want also that the port excavations  (in addition to Mose) cease to be an opportunity for enrichment for concrete companies in our area, first of all, Mantovani S.p.a., owned by Eng. Baita.
We ask you to build, together with the Committee No Big Ships/Lagoon Common Good, three days – 7,8,9 of June – of big mobilization against Major Works and against an unsustainable development model.
Three days for discussions and meetings, and with the opportunity to get in touch with all the national and international realities which fight for climate and ambient justice.
Three days of debates and musical and theatrical events, the possibility of a campsite and the opportunity to make our voice heard.
We ask you to confirm us as soon as you can your presence, and to contact us for more detailed information.info: nobigship@gmail.com       website:  www.nograndinavi.it 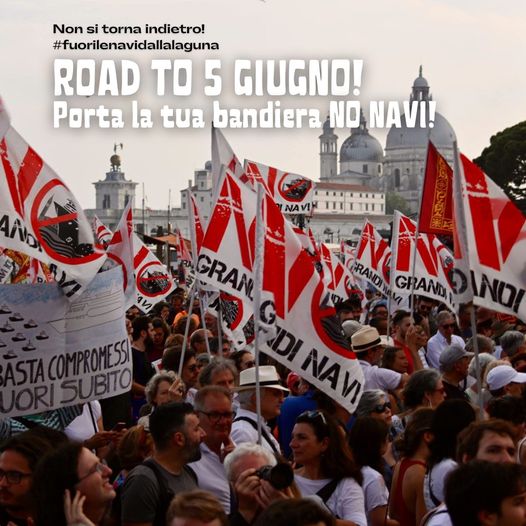