It’s 6am in St Mark’s Square, a time when this place is at its majestic best.

This is Canaletto’s Venice. Beyond the palaces, the rising sun glistens on the water of St Mark’s Basin.

And then the spell is broken. A massive cruise liner cuts across my view.

It’s a week since the MSC Opera crashed into the jetty a few hundred metres from the square. It was an incident which locals here had predicted would happen.

Almost universally, the people of Venice have complained about the presence of cruise ships so close to their lagoon city.

“We knew it would happen,” local Jane Da Mosto tells me. “It’s a massive smack in the face.”

Quite apart from the physical risks of having such huge vessels so close to a thousand-year-old crowded city, locals say their presence is damaging to the environment and brings the wrong type of tourism.

Jane is the founder of the charity We Are Here Venice, which campaigns to protect the city.

“Without considering the social and economic impact of bringing so many people into the city at the same time, all keen to spend as little money as possible, because the business model of the cruise ship encourages people to do all their spending on board,” Jane tells me.

“If one considers the environmental and physical impacts of these ships, the first things to say is that their atmospheric emissions are incredibly damaging to air quality in Venice.”

The cruise industry disputes this.

Francesco Galietti, Italy’s director of the Cruise Lines International Association, says worse pollution is caused by smaller boats in the narrow canals. He dismisses the suggestions that the ships bring the wrong type of tourism.

“I believe this is a misleading representation of our tourism,” he says.

“The economic impact in Venice is huge and our tourism is sustainable. Our tourism is not grab and run. Venice is a home port – that is the journey starts or ends in Venice – and most passengers spend at least a night in Venice at the beginning or at the end of their journey.

This isn’t a new argument. The debate over whether to allow these ships here has yoyoed for years.

In 2014, the Port of Venice proposed a ban and suggested dredging a new canal to re-route the ships. The regional government then overturned that decision.

Then Italy’s central government overturned that ruling, announcing that by 2015 all cruise ships would be banned.

But work on an alternative route – which itself raised significant environmental questions – never started. And so the argument went on, and the ships are still here.

The issue puts a focus on a much broader challenge: the survival of Venice.

This is a story of chronic mismanagement and a crumbling city of failed engineering projects and huge environmental challenges.

It’s more than that though. Encapsulated on one lagoon city are so many of the challenges we are all facing.

Jane Da Mosto’s son Vittorio is 22. He’s a student and increasingly active in trying to help preserve his city.

He’s taking us on the alternative canal tour. We pass stunning old buildings, crumbling at their base.

“This is a big problem of Venice – the traffic and the waves that they all make. Taxis aren’t controlled as much and they make damage,” Vittorio tells me.

Some experts reckon there we only have a few decades to save Venice.

“Sixty years is what they say,” Vittorio confirms.

“We have already gone to the no return point when we are 60 years until real drastic problems will start to, shall we say, invade Venice.”

We head out into the lagoon on which Venice sits to an engineering project that’s become a tragic joke for locals.

The Mose is a massive flood barrier. Or at least it should be.

“What it’s supposed to do is to come up when you have an extreme high tide. That’s usually over 1.30 metres,” Vittorio says.

Throughout, the Mose project has been plagued with allegations of corruption and mis-management, and environmentalists claim its design is flawed anyway.

We move from the Mose to the natural beauty of the lagoon.

“Here on the right you can see the salt marshes that are a vital part of the ecosystem of the lagoon and slowly with the dredging of the canals, the rising of the water level, these are slowly getting lost,” Vittorio says.

“In a strange way, the more people that come to Venice, the harder it is for the ecosystem to survive,” he adds.

We drive back past a sand bank, which Vittorio and his friends cleared of plastic a few weeks ago, and another that needs to be done.

Very high tides are more and more frequent here now. The city floods far more than it used to and the erosion is devastating. It is especially bad because of the salt in the water.

Jane Da Mosto is from London originally but a Venetian for 25 years and an environment scientist who now depressingly finds her subject all around her.

“I do think that Venice could be an important example to other places around the world,” she tells me.

“Venice is a unique city but the single critical issues that are challenging Venice are very common to other places, but its true we have benefit here in Venice of seeing things close up and magnified and also having an impact on the scale of this city because its relatively small and tightly packed.”

“I do think Venice is kind of the canary in the mine because it has so much international attention on what happens to Venice everybody thinks of Venice, most people love Venice so we really are at the coal face of showing that the future is possible.”

Back in St Mark’s Square the crowds have gathered. On a daily basis now there are double the number of tourists as they are residents. Regularly, 100,000 visit on a single day.

On the corner of the square is Gelateria Al Todaro. It was opened in 1948 by Giovanni Barbalich and brought ice cream to to the city for the first time.

“I am here because I want to do something for this city. I try and I think that a lot of persons – not only Venetians but everyone in the world who love Venice – want to do it. In my opinion we have to think about the city against the pollution, against the over-tourism so we have do decide how many person every day,” Claudio says.

He is also the president of the St Mark’s Square Traders Association and spends much time these days worrying about flooding.

“There are a lot of studies and yes it’s always more frequent. Yes it is,” he says.

“But now we have not only the problem of the high tide but it’s also the waves because a lot of water enter from the sea and its really strong and the pressure on the buildings that is terrible.

“It’s not like a lake, its like a river so really really strong water against the buildings, the palaces.”

Back on the canal with Vittorio, I ask how much he worries about his city.

“Quite a bit, yes. Recently more than I used to. It’s because I have become more active and I get to see all of the problems with a sense of being here.”

What’s encouraging is that he and his young friends are increasingly active in trying to help campaign for the protection and preservation of the city. He and his friends run a grass roots association called Venice Calls.

But up against that is the realisation that fewer and fewer people actually live in the city. The population is in decline.

Vittorio says: “I definitely think it’s important to invest in the young community of Venice and to help them find a place to live in Venice to keep them within the community so that they can help prevent these problems.

“If the motive is instead to fill it up with tourism and get more and more people from outside coming to live here that will lead to Venetians leaving the city and it becomes Disneyland.”

“If you save Venice as a living city with its resident population who know how to care for it, Venice is a better place to visit and also Venice is a microcosm of how to save a place that is relevant to the future of the world,” she says.

Jane lives in a sinking city surrounded by a rising sea and unsustainable unregulated growth in tourists but she is not despondent.

“All the problems of Venice can be broken down into the component parts and analysed objectively and solutions can be found,” she adds.

“We are not trying to inhabit Mars; we are trying to fix things in a city that’s been here for 1,000 years and I don’t want to be part of the population that lets it all just slip away.” 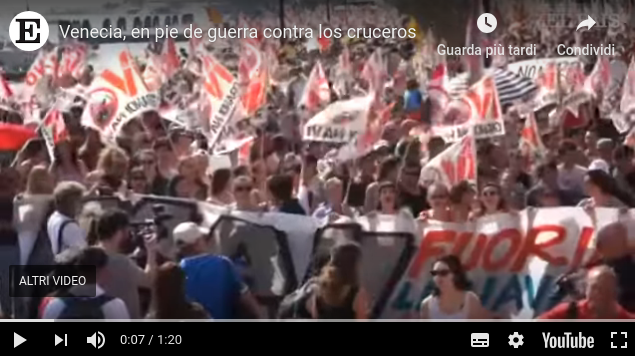