St Mark’s Basin will be turned into a motorway when 13 cruise ships travel through in one day, say protesters 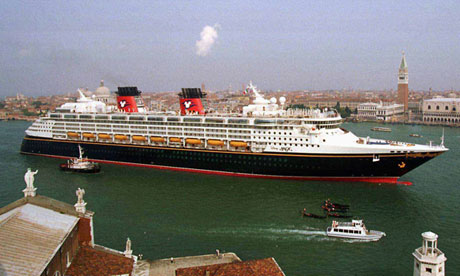 Residents of Venice will protest over the procession of cruise ships through St Mark’s Basin. Photograph: James Morgan/AP

Residents of the beautiful, fragile city of Venice are preparing to stage a canal-bank protest on Saturday over an invasion of up to 13 cruise ships in the space of 24 hours, which they say will turn St Mark’s Basin into a motorway.

The particularly busy weekend, apparently caused by a quirk in the cruise ship calendar, has reignited growing fears over the impact the vessels are having on the city and the alleged risk they pose to its infrastructure and inhabitants.

The groundswell of popular consternation has swept up Adriano Celentano, one of Italy‘s most famous singers, who took out a page in the country’s biggest-selling daily newspaper to voice his anger.

“Tomorrow will not be a nice day for our city, even if the sun is out,” declared the 75-year-old in an advert in Corriere della Sera, half of which was taken up with a black and white photograph of himself.

“With the ignoble procession of 13 ships in the Venice lagoon comes the Eternal Funeral of the world’s beauties,” he added.

Celentano is far from alone in his concern.

Silvio Testa, spokesman for the No Big Ships (No Grandi Navi) committee, which has been fighting against the rising traffic of cruise ships in Venice, has called on residents to attend a vigorous protest on the narrow Giudecca canal – a strip that cruise ships sail down daily, usually in far smaller numbers.

“We want to say ‘enough’ to this situation,” Testa told La Nuova Venezia newspaper. “St Mark’s Basin is like a motorway. Soon we’ll have to put traffic lights up.”

An estimated 40,000 tourists will be brought into Venice on board the cruise ships on Saturday and Sunday. Some view the influx of visitors as a much-needed economic boost, with tourists spending and thousands of locals employed in jobs related to the industry. But others fear the shiploads of tourists encourage a “Disney-fication” of their city – already one of the most visited in Europe. The number of tourists arriving in Venice on board cruise ships rose from below 100,000 passengers in 1999 to 1.7 million in 2012.

In a year that has seen the wrecked Costa Concordia languish off the coast of Giglio and a container ship crash into a tower in the port of Genoa, meanwhile, there are also concerns about the safety of the huge so-called floating palaces.

Earlier this summer, a large ship was alleged to have come within 20 metres of the shore and almost squashed a vaporetto, or water bus. Owner Carnival denied the incident, saying the report was mistaken and photographs had distorted the distances involved.

But Italy’s environment minister, Andrea Orlando, has said that in general the issue is cause for concern. “As much as there may be a high level of professionalism in the controls and in the management of the traffic, there is always a margin of risk,” he told La Stampa newspaper last week. Convinced that something needs to change, he has invited the various parties to present their suggested solutions to the government.