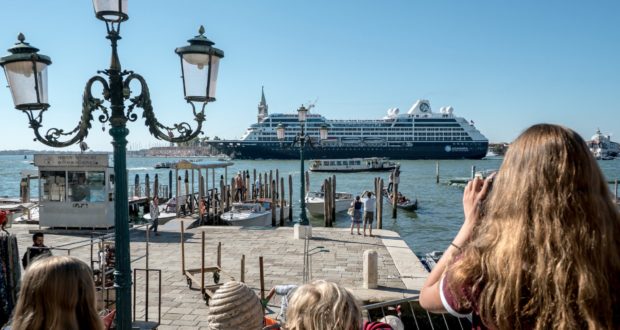 VENICE — “You guys, just say ‘skooozy’ and walk through,” a young American woman commanded her friends, caught in one of the bottlenecks of tourist traffic that clog Venice’s narrow streets, choke its glorious squares and push the locals of this enchanting floating city out and onto drab, dry land. “We don’t have time!”

Neither, the Italian government worries, does Venice.

Don’t look now, but Venice, once a great maritime and mercantile power, risks being conquered by day-trippers.

The soundtrack of the city is now the wheels of rolling luggage thumping up against the steps of footbridges as phalanxes of tourists march over the city’s canals. Snippets of Venetian dialect can still be heard between the gondoliers rowing selfie-snapping couples. But the lingua franca is a foreign mash-up of English, Chinese and whatever other tongue the mega cruise ships and low-cost flights have delivered that morning. Hotels have replaced homes.

Italian government officials, lamenting what they call “low-quality tourism,” are considering limiting the numbers of tourists who can enter the city or its landmark piazzas.

“If you arrive on a big ship, get off, you have two or three hours, follow someone holding a flag to Piazzale Roma, Ponte di Rialto and San Marco and turn around,” said Dario Franceschini, Italy’s culture minister, who lamented what he called an “Eat and Flee” brand of tourism that had brought the sinking city so low.

“The beauty of Italian towns is not only the architecture, it’s also the actual activity of the place, the stores, the workshops,” Mr. Franceschini added. “We need to save its identity.”

The city’s locals, whatever is left of them anyway, feel inundated by the 20 million or so tourists each year. Stores have taken to putting signs on the windows showing the direction to St. Mark’s Square or Ponte di Rialto, so people will stop coming in to ask them where to go.

The majority of the anxiety has centered on the cruise ships that pass through the Giudecca Canal, blotting out the landmarks like an eclipse blocking out the sun. (The one shown here isn’t even a big one.)

Some of the roughly 50,000 Venetians who remain in the city, down from about 175,000 in 1951, have organized associations against the “Big Ships,” selling T-shirts that show cruise boats with shark teeth threatening fishermen. In June, almost all the 18,000 Venetians who voted in an unofficial referendum on the cruise ships said they wanted them out of the lagoon.

“One problem is the ships,” said Mr. Franceschini, who called their passage in front of St. Mark’s Square “an unacceptable spectacle.”

But the ships bring in money, and since Venice is not the trading power of yore, it needs all the euros it can get. The cruise ships don’t just bring fees into the city, they also create jobs down a whole supply chain, benefiting mechanics, waiters and water taxis. The gondoliers who change into their striped shirts early in the morning and put sunscreen on their bald heads have steady work.

When a visitor, or at least this visitor, arrives at the Venice train station and encounters that iconic watery avenue, a strange sensation occurs of being in the Las Vegas version of Venice rather than in the real thing. Maybe it’s all the luggage, the shopping bags, the lack of Italians.

Many of Venice’s locals reside in the Castello section of the city, far enough away from San Marco Square, the center of tourist gravity, to enjoy a semblance of normal life. But only a semblance.

“If you want to get some prosciutto, you can’t because the Salumeria is gone,” said Tommaso Mingati, 41.

His family kept a small apartment here but, like most former residents, had moved out to Mestre, the mainland section that no one has ever called Queen of the Adriatic. As his mother regretted the city becoming a “Disneyland on the Sea,” Mr. Mingati said that the expanding empire of bed-and-breakfasts was now forcing people out of Mestre.

All of those bed-and-breakfasts, and the city’s roughly 2,500 hotels, produce a lot of towels and linens that need laundering. Venice no longer has the capacity for such an undertaking. So, at dawn, boats carry the dirty laundry and garbage out to Tronchetto, an artificial island and parking lot for trucks coming from the mainland.

In turn, they deliver fresh towels but also untold gallons of drinking water, foodstuffs, bottles of orange Aperol to make the city’s ubiquitous Aperol Spritz and anything else consumed inside the lagoon.

One weekend a year, during the Feast of the Redeemer in July, Venetians take back the city. They flow back in from Mestre to drink wine on the banks of the Grand Canal and wait for a fireworks show that puts New York’s Fireworks by Grucci to shame.

This year, the celebration coincided with the Venice Biennale, which draws thousands of sophisticated, globe-trotting visitors to Venice to check out the latest in art, dance and theater. The locals and the art enthusiasts have developed a sort of alliance against the crowds who march on St. Mark’s.

“We are a model of what could be,” said Paolo Baratta, the president of the Biennale, as he watched the fireworks from the terrace of the festival’s headquarters. The people emptying out of the cruise ships, he said, “aren’t concerned with what happens in Venice.”

At night, many of the tourists return to their cruise ships or tuck in after early dinners. The result is a momentary reprieve but also, like Venice in its slow winter months, a time warp to an earlier Venice.

For me it is the one I first encountered nearly 20 years ago, before Google Maps, when I could get lost and stumble onto seemingly deserted or forgotten campos. At night, away from the city center, a couple of tourists celebrating their wedding at a divey cafe was not cloying, but charming.

Those enchanting hours stretched into the early morning, before the tourists stirred, when St. Mark’s Square itself was empty except for the pigeons and the early risers headed to work.

Those hours, with the shadows still long and the light reflecting off the lagoon and the triforia windows, reminded me of what Raffaelle Nocera, who otherwise sounded depressed about the state of his city, told me as he navigated a water bus around the Grand Canal.

“If you get up early enough,” Mr. Nocera said, “you get all of Venice to yourself.”

It reminds you of why it is so worth protecting, and why Italians have been taking a stand.

“Today it’s Piazza San Marco or Ponte di Rialto,” Mr. Franceschini said. “In a few years it could be that the problem spreads.”

Correction: August 2, 2017
Because of an editing error, earlier versions of two picture captions with this article misspelled the name of an island in the Venetian lagoon. It is Giudecca, not Guidecca.