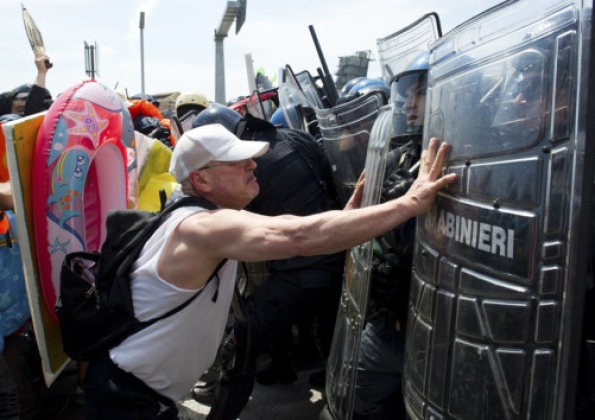 A protester clashes with police during the blockage of the Venice Tourist Port. Picture: Getty

MASKED protesters in Venice have clashed with riot police as opposition mounts to the massive cruise liners packed with tourists that edge within yards of the city’s fragile churches and palaces.

Protesters waved inflatable beach toys as they tried to push through police lines at the weekend to where cruise ship passengers huddled with their suitcases, as a flotilla of 40 small boats swarmed round the ships, blocking their exit from Venice for hours.

“We want the cruise ships out of the Venice lagoon and this successful demonstration really made that point,” said Silvio Testa, the spokesman for a local pressure group which has led growing protests against the 660 cruise ships that annually skirt St Mark’s Square and inch down the city’s Giudeca canal before docking.

Mr Testa said four vessels carrying about 15,000 passengers had been held up by the protesters, who have swelled in number since a cargo ship smashed into a 165ft-tall observation tower in Genoa harbour in May, toppling it into the sea and killing seven people.

Fears of a incident in Venice were already growing, after the Costa Concordia cruise ship smashed into rocks on the Tuscan island of Giglio last year, while the fragility of Venice’s ancient architecture was evident again yesterday as a section of St Mark’s Square was cordoned off when crumbling bricks fell from the bell tower of the basilica.

“The managers at the port argue that sand banks in the Giudeca canal would stop a ship colliding with buildings, but 110,000 tonnes of cruise ship would have the force to do a lot of damage,” said Gianni Darai, a Venetian activist.

Protesters have also warned of damage to the foundations of buildings as the passing ships displace thousands of tonnes of water, and claim each vessel generates the same amount of pollution as 14,000 cars.

Residents have also complained about the sight of the tower block-like ships looming over Venice’s narrow streets and say souvenir shops catering to cruise holiday tourists who spend a few fleeting hours in the city are pushing rents up and forcing out local shops. But a committee set up to defend the ships has countered that the 1.8 million tourists sailing into town each year provide work for 5,000 families, while the port authority says the business provides 3 per cent of Venice’s GDP.

As a compromise, the port authority has proposed the dredging of an alternative route to the port across the Venice lagoon which avoids the Giudeca canal, partly following a route taken by cargo ships to the mainland port of Marghera.

The plan will be discussed on Thursday in Rome at a meeting between ministers and port managers, held in response to growing alarm in Venice.

But Mr Testa said the cruise ships should be kept out of the lagoon altogether, or substituted with smaller boats.

“One hundred years ago, the average depth of the lagoon was 40cm, but thanks to shipping it has been getting deeper ever since, so it now has the ecosystem of a sea bay, not a lagoon,” he said.