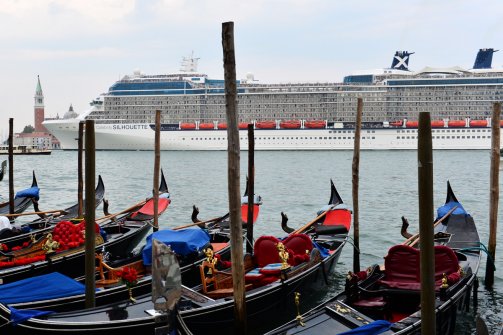 This week, battle lines were drawn in Italy’s maritime city, pitting residents who support the cruise-ship industry for its economic benefits against those who would like to seal off the lagoon for fear that the giant vessels are destroying its fragile ecosystem. But the conflict is about far more than just the ships. It is emblematic of a much larger issue: whether tourism at any cost is worth the price of Venice’s soul.

Cruise-ship tourism in Venice has increased by 439 percent in the last 15 years, catapulting the city to the status of cruise capital of Europe. The growth is an obvious boon for the economy, especially during one of the worst recessions in recent history. On Tuesday night, nearly 1,800 supporters gathered at Venice’s passenger port to celebrate the growth and success at a self-congratulatory “Port Party” against the backdrop of massive cruise ships at the dock.

According to the Cruise Venice Committee, which organized the gala affair, cruise-ship passengers spend around $194 million annually in the city. More than 650 ships make their way in and out of the city’s passenger port each year, and each ship brings an additional $324,000 to those who man the port and supply the ships with provisions. And that doesn’t even take into consideration trinket sales and restaurant meals and the hotel rooms that many passengers book before their ships embark. “This industry feeds 3,000 families here,” says Massimo Bernardo, the head of the Cruise Venice Committee. “We can’t compromise that; we can’t sacrifice the economy.”

Bernardo told The Daily Beast that it takes less than 10 minutes for a cruise ship to pass through the heart of Venice, thereby limiting any widespread ecological damage. “That is only eight days out of 365 a year,” he said. “Venice receives so many more benefits from the industry than any inconvenience it causes.”

Even though the obvious economic factors may be inarguable, Venetians who want to stop the ships say there is nothing to celebrate. They argue that Venice is already so massively overcrowded with tourists that the city has become “unlivable.” The population of Venice is in constant decline as residents slowly move out and give way to tourists. “If the benefit of tourism is the death of a city, then tourism is not worth it,” says Silvio Testa, spokesman for No Grandi Navi, or No Big Ships. “Cruise ships may not be entirely to blame, but they are a major component of a mechanism that is changing Venice like a gradual tide that erodes the substance of the city.”

Other opponents say that cruise ships are a quality-of-life issue. “The vibration from the maxiships feels like small earthquakes under your feet,” says Matteo Secchi, head of the pro-Venice group Venessia, which would like to ban the ships from the lagoon. “Venice is one of the pearls of the world, and these ships are ruining the view.”

Maritime experts say it is almost impossible for an accident like theConcordia debacle to happen in Venice.

Efforts to combat the entrance of the big liners into the Venetian harbor were bolstered last year when Capt. Francesco Schettino misguided the Costa Concordia cruise liner and crashed into the rocks off the Tuscan island of Giglio, killing 32 passengers and crew members. The accident seemed to underscore the risks involved with maneuvering giant ships close to landmasses, even though prior to the January 2012 accident, few could fathom such a thing would actually ever happen.

But in reality, maritime experts say it is almost impossible for an accident like theConcordia debacle to happen in Venice. First, the depths of the canals are lined with sediment and silt, making what navigators call a subaquatic “mud track” for the ship to follow. “The ship would have to jump the mud to deviate,” says Capt. Emilio Gamba who navigated the Venice canal for more than three decades.  “Venice is actually the safest port in the world.” But more important, before entering the lagoon, two skilled pilots board the cruisers, which are also guided from sea level by two tugboats to ensure they can’t veer off course, meaning five captains help each ship navigate in and out of the port. “It would take five Captain Schettino’s to cause an accident like that in Venice,” says Roberto Perocchio, director of the Venice Passenger Terminal. “I wouldn’t be managing director of this port if I thought there was such a risk.”

Still, naysayers argue that even without a catastrophic accident, damage to the lagoon is done every time a ship obscures the view. Most of the ships displace 90,000 tonnes of water when they move, which stirs up the canal sediment and changes the morphological state of the lagoon. He says that those who support the cruise industry conveniently turn a blind eye to the fragility of the lagoon by glossing over the risks to draw even more tourists for the sake of profit. Efforts to pacify the opposing views include studies into dredging out an alternative route to the lagoon, but few agree that the investment would be worth it. “For centuries we altered the boats to traverse the lagoon, and now we’re talking about altering the lagoon for the boats,” says Testa, who believes the only alternative solution is to build an offshore port outside the lagoon and limit the number of tourists altogether. “Every solution brings its own set of problems,” says Secchi.

“It’s difficult to strike the balance between tourism and real life, when in Venice they are inseparable.”

Barbie Latza Nadeau, author of the Beast Book Angel Face, about Amanda Knox, has reported from Italy for Newsweek since 1997 and for The Daily Beast since 2009. She is a frequent contributor to CNN Traveller, Departures, Discovery, and Grazia. She appears regularly on CNN, the BBC, and NPR.