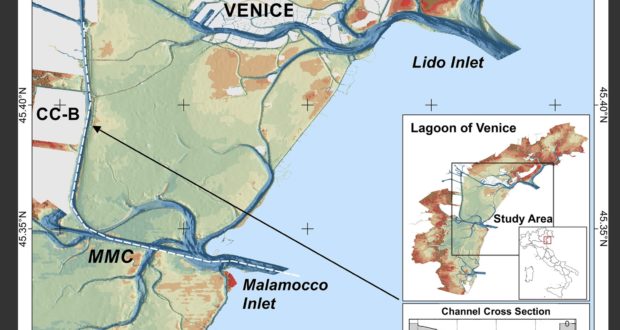 Tratto da journals.plos.org – Abstract
An investigation based on in-situ surveys combined with remote sensing and GIS analysis revealed fast shoreline retreat on the side of a major waterway, the Malamocco Marghera Channel, in the Lagoon of Venice, Italy. Monthly and long-term regression rates caused by ship wakes in a reclaimed industrial area were considered. The short-term analysis, based on field surveys carried out between April 2014 and January 2015, revealed that the speed of shoreline regression was insignificantly dependent on the distance from the navigation channel, but was not constant through time. Periods of high water levels due to tidal forcing or storm surges, more common in the winter season, are characterized by faster regression rates. The retreat is a discontinuous process in time and space depending on the morpho-stratigraphy and the vegetation cover of the artificial deposits. A GIS analysis performed with the available imagery shows an average retreat of 3˗4 m/yr in the period between 1974 and 2015. Digitization of historical maps and bathymetric surveys made in April 2015 enabled the construction of two digital terrain models for both past and present situations. The two models have been used to calculate the total volume of sediment lost during the period 1968˗2015 (1.19×106 m3). The results show that in the presence of heavy ship traffic, ship-channel interactions can dominate the morphodynamics of a waterway and its margins. The analysis enables a better understanding of how shallow-water systems react to the human activities in the post-industrial period. An adequate evaluation of the temporal and spatial variation of shoreline position is also crucial for the development of future scenarios and for the sustainable management port traffic worldwide. 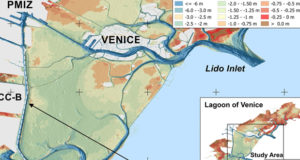