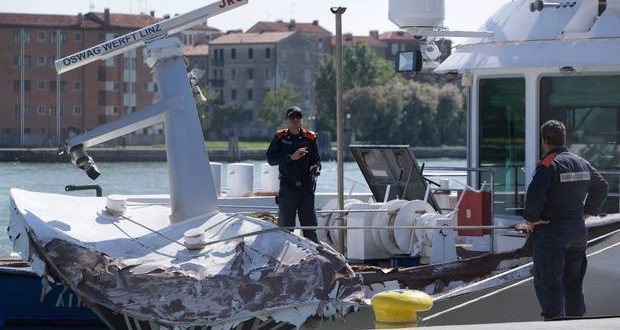 A Kiwi woman caught up in the Venice cruise ship crash is recovering in hospital with a broken shoulder.

Joy Milmine and her husband Colin were on a trip around Italy when they were involved in the dramatic incident, in which a towering, out-of-control cruise ship rammed into a dock and tourist riverboat on a busy Venice canal.

Milmine and her husband were in the River Countess riverboat on the Giudecca Canal – a major thoroughfare which leads to St Mark’s Square in the Italian city – when the MSC Opera sailed straight into the dock, sending people running for their lives.

She was one of five people injured in the incident, including an American and two Australians aged between 67 and 72. 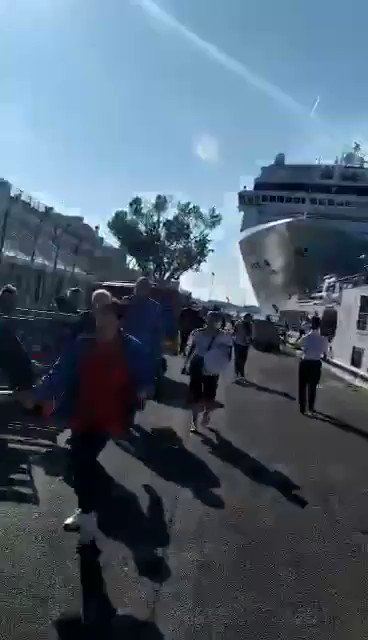 Milmine suffered a broken shoulder, and is currently in hospital awaiting further x-rays to determine the extent of her injury and whether she needs surgery, her sister-in-law told the Herald.

Cariad Milmine said the family were shocked to hear about the crash.

“It was really surprising,” she said. “We’d actually seen it on the Herald online before we realised it was our sister-in-law, so it was a bit of a shock to find out the Kiwi involved is your sister-in-law.”

However, her injuries weren’t life threatening, and she was doing ok, Cariad Milmine said.

The couple and the rest of the family were waiting to hear more from the doctors before they could make any plans.

“They’ve got to wait for the hospital to decide what they’re going to do before they can make any decision, I think they have to have a proper diagnosis done,” she said.

The family had not been told which bones in her shoulder were broken and how the doctors were going to fix it, she said.

“They will possibly come back, it will be the end of their holiday.”

Joy and Colin had been in Venice for a couple of days before the crash, as part of their tour of Italy. The pair flew to Rome a week and a half ago, and made their way to Venice in Italy’s northeast. They were due to start a land tour yesterday.

The cruise ship crash made headlines around the world, as videos showed the towering ship apparently unable to halt its momentum, blaring its horn as it ploughed into the much smaller riverboat and the dock as dozens of people run away in panic.

Venice is one of the world’s most popular tourist destinations, and the busy summer tourist season has already started.

Following the collision, Italian medical authorities said four of the people injured were women — an American, a New Zealander and two Australians between the ages of 67 and 72.

They were reportedly hurt as they fell or tried to run away when the cruise ship rammed into the River Countess.

The cruise ship’s owner, MSC Cruises, said the ship, the MSC Opera, was about to dock at a passenger terminal in Venice when it had a mechanical problem.

Two towboats guiding the ship tried to stop it but they were unable to prevent it from ramming into the riverboat.

“The two towboats tried to stop the giant and then a tow cable broke, cut by the collision with the river boat,” Davide Calderan, president of a towboat association in Venice, told the Italian news agency ANSA.

A spokeswoman for the Ministry of Foreign Affairs and Trade (Mfat) said: “The New Zealand Embassy in Rome is providing consular assistance to a New Zealander involved in the cruise ship collision in Venice. For privacy reasons, no further information will be provided.”