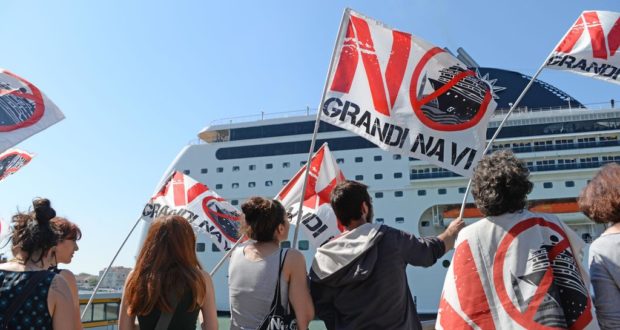 Cruise Ship Rams Into Tourist Boat and Dock in Venice, Injuring at Least 4

ROME — A colossal cruise liner plowed into a smaller tour ship and a wharf on a canal in Venice on Sunday morning, injuring four people and reigniting arguments about the dangers of allowing the huge vessels to pass through the fragile lagoon city.

Footage of the crash showed the cruise liner, the approximately 900-foot-long MSC Opera, blaring its horn as it hit the wharf and crashed into the tour ship, the River Countess, which was docked at the San Basilio Terminal on the Giudecca Canal, where passengers often disembark from smaller vessels.

The accident occurred around 8:30 a.m. Videos taken from the dock showed the ship heading straight for the wharf, unable to stop, while people on the quay ran away in panic. Four people from the cruise ship were treated for light injuries, the Italian news agency ANSA reported.

The MSC Opera was approaching the cruise ship terminal in Venice to dock when it had a “technical problem,” the ship’s operator, MSC, said in a statement. The company said that the ship had been accompanied by two tugboats when it hit the wharf and the smaller boat at San Basilio.

Investigations were underway to “understand the exact dynamic of the facts,” the statement said, adding that the company was cooperating fully with the local authorities.

Mayor Luigi Brugnaro of Venice said the accident confirmed that “it’s no longer thinkable that big ships can pass through the Giudecca Canal. We’ve been saying it for eight years,” ANSA reported. According to the agency, Mr. Brugnaro said he had spoken to the Italian infrastructure minister, adding, “Now we must urgently make sure that ships no longer pass in front of St. Mark’s.”

Venice is a popular destination for cruise ships, which sail past St. Mark’s Square and down the Giudecca Canal to dock at the cruise ship terminal. But for years, residents have raised concerns about the effects that the massive ships have had on the frail city, citing the damage caused by pollution, erosion on underwater foundations and potential crashes.

Subscribe for original insights, commentary and discussions on the major news stories of the week, from columnists Max Fisher and Amanda Taub.

A protest in Venice on Sunday against the docking of big ships in the city.CreditAndrea Merola/EPA, via Shutterstock 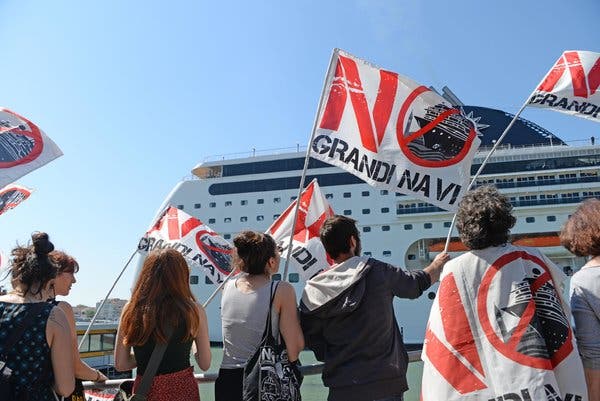 In 2017, a committee of local, provincial and national officials announced a plan to divert cruise ships along a roundabout route through an existing canal that would skirt the city altogether.

But the proposal was not put in place, with critics saying that the potential impact on the lagoon had not been sufficiently analyzed. Many say that the large ships should steer clear of the area altogether, and dock instead at cities like Trieste, farther round the coast.

The Italian coalition government, which came to power in elections a year ago, has asked for further cost-benefit studies to weigh other options.

Pino Musolino, the president of the Port of Venice, said in a statement that it was urgent to move “as quickly as possible to finally give a solution to the question of large ships in Venice, removing cruise ship traffic from the Basin of St. Mark and the Giudecca Canal.”

Infrastructure Minister Danilo Toninelli said in a post on Twitter on Sunday that the crash “showed that big ships must no longer pass through the Giudecca.”

“After many years of inertia, we are finally close to a definitive solution to protect both the laguna and tourism,” he added.

Giuseppe Tattara, a member of a Venetian citizens’ committee that has vociferously opposed the cruise ships, said that the collision on Sunday proved that “accidents can always happen, even with modern ships, despite the assurances of companies that say that there are no risks.”

Mr. Tattara said that had the MSC Opera crashed about 100 yards before the wharf, “the ship would have hit the older boardwalk along the canal, which “would have disintegrated.”

“The only solution is that cruise ships remain out of the lagoon,” he added.