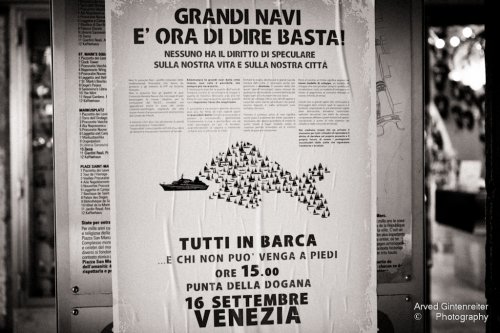 Tourism belongs to Venice since earliest days. First visitors came as pilgrims for religious reasons, today’s pilgrims come for romantic and city’s beauty (if not shopping). Many arrive by cruise ship – passing Piazza San Marco in a distance one thinks you can just reach over with your arms. A spectacle for both sides, people on the boat and in the square. But what if ever a captain looses control, if by accident a ship crashes in the lagoon? A desaster for the city and it’s fragile ecosystem surrounding. Also the large waves the ships produce can destroy the foundations of town over time.

The protests are not meant as being against tourism and not against cruise ships in Venice. Instead it is about a specific route as well as about weighing adventure and risk.

Especially since the Costa Concordia desaster a big debate is going on if these monstrous vessels really have to pass the one and a half millenniums old city so close. Pass? Their route takes them right through! Can’t they just take another route around, of even better stay out in the Mediterranean, debarking in smaller boats, many Venetians ask. The cruise companies say no, because of the adventure they sell with the route as it is. Venetians answer, you can also take a ride by a local waterbus later to enjoy the same view.

Even more of an adventure travelers had on the cruise ships leaving Venice past Sunday evening. A group of protesters called for a boat demonstration against big ships taking their route right through the city. Police came on land, in boats and by helicopter.

A new form of spectacle for both sides.