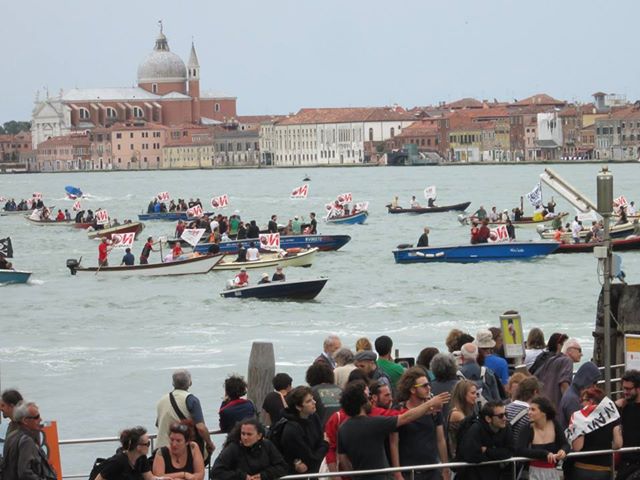 (ANSA) – Venice, June 10 – The grass-roots movement to block large cruise vessels from passing through Venice demanded again to be included in government talks on the issue. The group, known as No Grandi Navi (No Big Ships), issued its statement a day after police clashed with demonstrators blocking the foot entrance to cruise ships docked off the Giudecca Canal, where over 600 large cruise liners pass annually. “We must change the model and oppose gigantism, which only serves the interests of the cruise companies and (instead) structure cruises around small ships, with a small number of passengers,” said a statement. The Italian government is holding talks on Thursday into the issue of large ships in Venice, fears around which have escalated following a crash in the port of Genoa that killed nine people last month, and the Costa Concordia cruise wreck off the Coast of Tuscany that killed 32 in January, 2012. The head of the Venice port authority called such fears “alarmist”. “Solutions to such problems have been studied…by the environment and and transport ministries (and) other responsible authorities,” said Paolo Costa. “Those solutions will be on display again in Rome on Thursday”. Experts warn that the thousand-year-old wooden piles that prop up the city underwater would crumble like toothpicks under the weight of a 114,500-ton cruise ship like the Costa Concordia. In addition to the risk of a collision, liners ushering tourists into the heart of the city disrupt the extremely fragile foundation of Venice and its medieval monuments by displacing massive amounts of water in the shallow lagoon, they add. “The tragic accident (of the Costa Concordia) reinforces longstanding concern over the risk that large cruise liners pose to sites inscribed on UNESCO’s World Heritage List, particularly the Venice Lagoon and the Basin of San Marco,” UNESCO said last year in a statement to the Italian government. The issue is tense due to the fact that many Venetian residents work in the multi-billion-euro cruise industry.