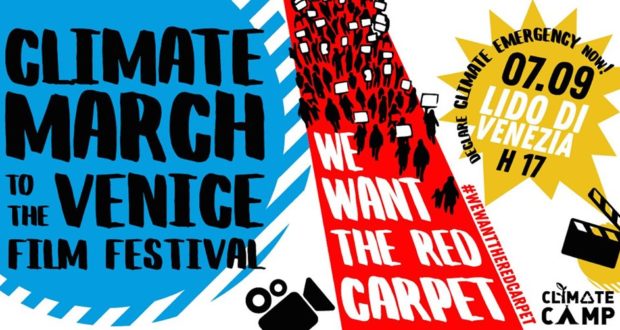 From Venice we are calling for a signal from the whole industry of cinema and culture: we invite you to join us asking for a radical turnaround and a change of perspective to save the planet.
During the week of the 76th edition of the Venice Film Festival, we call for actors and actresses, directors, producers, technicians, costume designers, screenwriters to participate to the Climate March to the Venice Film Festival on September 7 and/or to record a short video with the hashtag #GreenTheRedCarpet.
Filmmaking – art in general – has been able to superbly narrate the tragedy of climate change, but the commitment goes beyond any image. Many and many over the years have made their visibility available to the struggles for the salvation of our planet: we ask for newcomers to join the chorus of those who struggle, with desperate urgency, for a systemic change.
The seventh art has enormous potentials, many of which are still unexplored. With this call we ask anyone who works in movies and theatre industries to give voice to these possibilities, to tell how this world can help the fate of humanity (and not only), and to do so using the keyword #GreenTheRedCarpet.

We thank Nico Cartosio for removing the copyright from his song “Siberia” and making it possible to use it for this video.

CALL TO THE CULTURAL AND MOVIE INDUSTRY FOR CLIMATE JUSTICE, IN SUPPORT OF THE CLIMATE MARCH TO THE VENICE FILM FESTIVAL (September, 7th)

This year, during the Venice International Film Festival, we have decided to deliver a message loud and clear: we are running out of time, we demand an urgent turnaround to avoid dangerous climate breakdown!
On September, 7th, aside from the Venice Climate Camp at the Lido, we will march towards the Red Carpet to reiterate once again that climate emergency is real and we can no longer be a passive audience watching the Earth sinking into abyss.

“No art passes our conscience in the way film does”, said Bergman. Within the movie industry, our collective imagination has been shaken by the catastrophic and apocalyptic scenarios of masterpieces such as ‘The Day After Tomorrow’, ‘Quintet’, ‘Beasts of the Southern Wild’, ‘The Age of Stupid’, ‘Waterworld’, ‘The 11th Hour’. Yet today, the evoked imagery no longer belongs in the realm of science fiction. On the contrary, disaster is increasingly visible, tangible and close, whether it is the fires that devastated thousands and thousands of hectares of forest in Brazil and Siberia,
the collapse of polar glaciers or the tornadoes, storms and other extreme weather events becoming ever more frequent across the globe.
Those who face the consequences of anthropogenic warming are the populations of the global South, who are subsequently forced to migrate northwards in search of refuge, but also fauna and flora are increasingly threatened and exposed to an unavoidable extinction.
The highest temperatures ever registered in the past July represent only one of the decisive signs towards the irretrievable.

Venice, a city of globally renowned beauty as well as a gem of the movie industry, is put at risk and compromised by an ever-growing aggressive capitalism directed towards the most insensitive exploitation of those who live in the city and its delicate ecosystem. Estimated as the most polluted harbor city in Italy and as the third most polluted in Europe, the Serenissima is also suffering from an extensive exodus of residents. In only four years, the population fell from approx. 56,000 units to 52,000. A lady on a precarious balance, whose unique and centuries-old charm has been preyed on by cruise lobbies and the mass tourism monoculture.
Despite the serious accident of June, 2nd, when a cruise ship literally crushed a river boat and a dock, the Italian government has so far been unable to propose a real solution for the safety of the lagoon and of its inhabitants. This goes without mentioning the huge and useless construction of MOSE, a major work already costing six billion euros which turned into a failure.
A construction project which is, moreover, unfitting and dangerous due to the sea-level rising expected for the coming decades.

Therefore, on September, 7th we will march towards the Red Carpet because Venice can deliver an important universal message, and we wish that a crucial voice of support may come from the very people who will walk down that carpet, or have done so in the past.
We call to join us the world of culture, arts and show business too, no one excluded.
Unfortunately, despite the repeated scientific and social calls, the world is still into the hands of deniers (Trump, Bolsonaro, Putin and so on) who keep protracting criminal climate policies. We will not be saved either by the rhetoric of green capitalism nor by green-washing.
We demand real climate justice. That the next Italian government could finally declare a climate emergency, shut-off production that is driving climate breakdown, and seek a just transition into an ecologically regenerative economy. That is to say, abandoning damaging construction activities in order to truly commit to the safeguard of our territory which is already profoundly subjected to climate change. 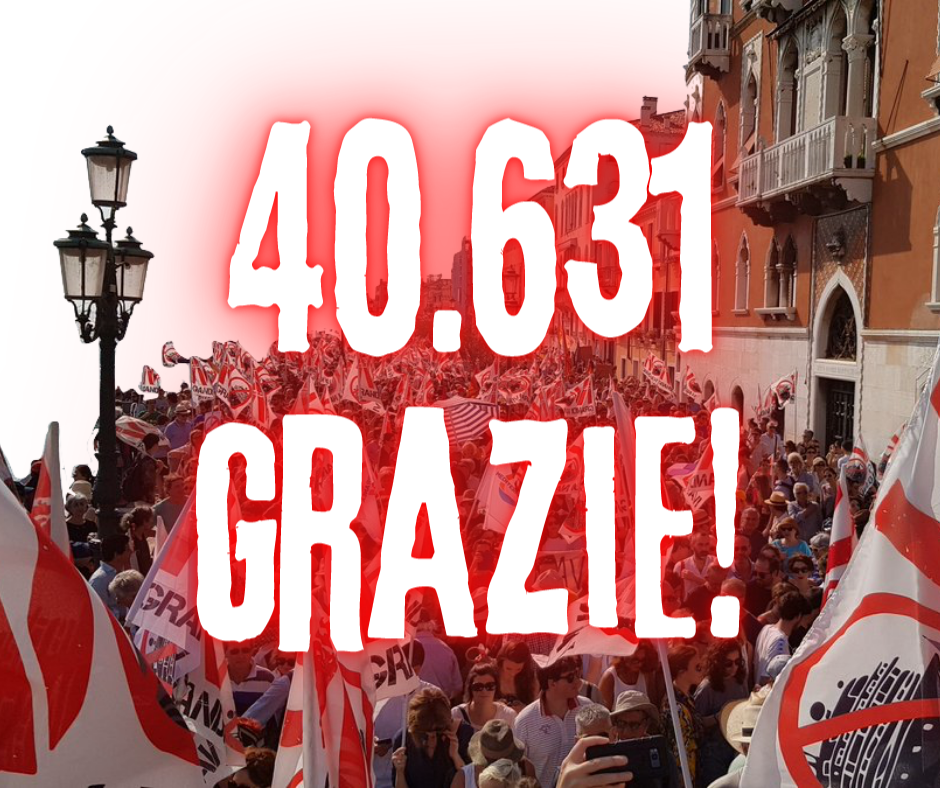